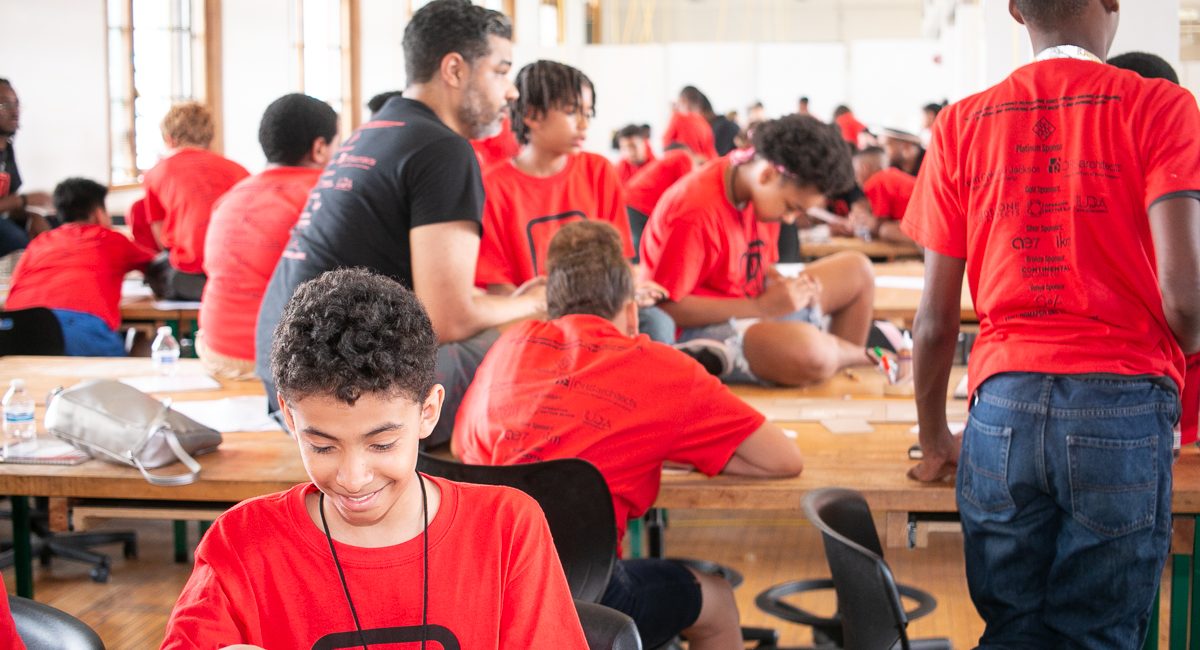 NOMAPGH focuses on highlighting its members who advance professional equity, promote and support minority architects, and inspire youth. Thanks to Michael Larche for attending Build PGH and being willing to share his experiences and highlight some of our members along the way!

AIA Pittsburgh’s annual continuing education conference and exhibitor show, brings together a community of architects and built industry professionals to engage in institutional learning. The largest, best attended continuing education event in our region, Build Pittsburgh also provides an opportunity to interact, network, and connect with all aspects of the built industry. Last year, over 400 design/build professionals attended Build Pittsburgh.

Aside from studying architecture from 2012-2017 at Tuskegee University, Michael currently has 1 full year of professional architectural experience. He enjoys exploring all types of architecture whether it be healthcare related or community related. He is curently building experience to obtain his license and is working as a graduate architect at DRS Architects. Michael joined NOMAPGH this year!

Build Pittsburgh’s theme for this year was centered around the “Faces of Design,” and there were numerous faces to become acquainted with in association with design in Pittsburgh. The convention offered a variety of lectures for one to pull knowledge from throughout the day, but it began with Hilda Espinal, the keynote speaker, who imparted an approach of designing architecture through various technologies. One of her more stand-out ideas was implementing virtual reality to enhance design collaboration between designers. Using this medium could potentially keep projects moving at a steady pace if the collaborators aren’t in the same room, and it could simulate a world as if they were there with the design or even the model in front of them at their disposal. Virtual reality could also be used to flush out building flaws and hazards that might arise during the construction phase by allowing the designers to place themselves inside of the built 3D space. In all the options Hilda had to offer, she seemed most eager to share this one. The individual sessions provided their own source of takeaways for architects who were looking to go back to their firms and share some knowledge. NOMAPGH’s own President, Alicia Volcy, and Parliamentarian, Ernest Bellamy, participated in a few panels imparted their experience and knowledge to the crowd of professionals.

In Alicia’s sessions, specifically “Working Across Differences” session, the panel relayed to the audience the importance of creating a workspace that not only accepts the differences of others but celebrates them as well. They provided an abundance of examples, some of them were personal examples, and they had the audience interact in activities with each other as well which made the purpose of the lecture stick. In the “Women in Architecture,” session, the panel discussed how women in their fields were more than just a feature. Points were made as to how only Zaha Hadid is the only woman to show up when “famous architects” is put in a major search engine. Not only is that an issue, but women of color in design don’t even show up when the words “female architects” are input in a major search engine. They also touched on differences in pay between women and men in their respective fields and the difference in pay between women and women of color. Bringing women to the forefront of design and valuing them was the overarching theme of this session. Both sessions hosted issues that have been brought up in the workforce time and time again. Hopefully, these sessions takes us one step closer to equality in the workplace.

In Ernest’s session, “A Conversation About Firm Culture,” the panel discussed attracting and retaining talented emerging professionals. The panel offered perspectives from both architects and non-architects to the experienced professionals perspective and the emerging professionals. Some of the suggestions that were offered to the attending firm leaders to attract and retain young talent was to have transparency within the firm, encourage their younger staff to take the ARE, make them feel as if they belong to the firm, and aid them in honing their craft. Build Pittsburgh had a multitude of lectures to sit in on, but unfortunately, the individual person could only attend four full sessions. Hopefully, everyone who attended their individual sessions walked away with a plethora of ideas to better their firm, grow their firm, diversify their firm, or maybe even start their own firm.